For better illustration, the examples listed in this document are from the perspective of an AccountAdmin.

New users can be created on User Management page as follows. You can toggle the "Force Password Change" checkbox to decide whether the new user needs to change a new password upon first login. 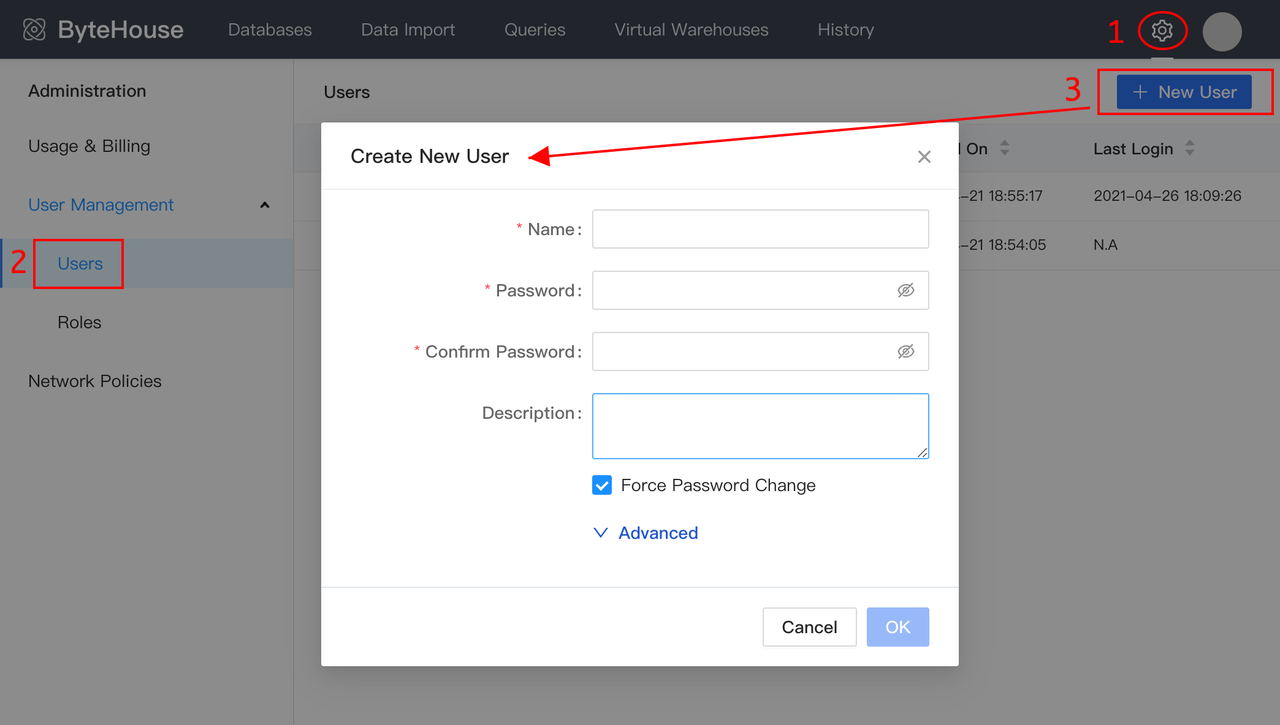 You can also specify some advanced information for the new user. 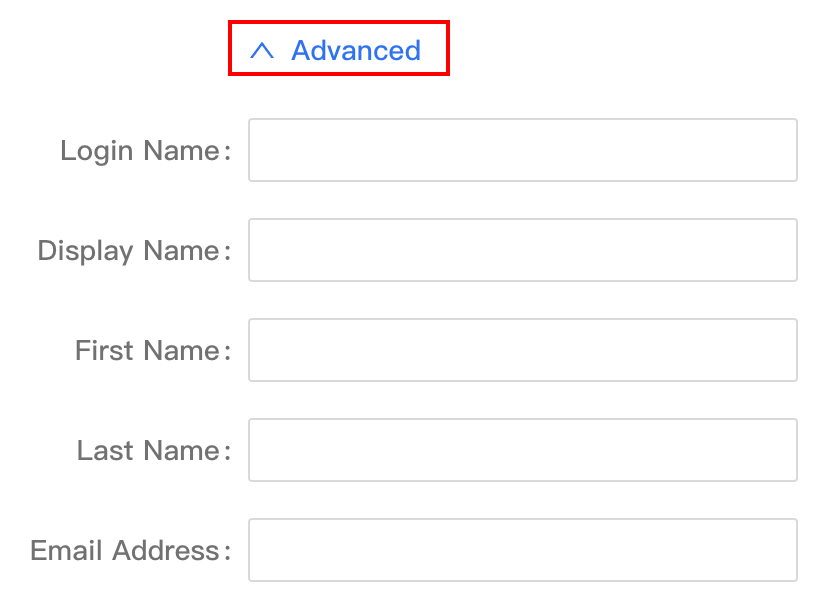 On the user page, Account or User Administrators can view all the users. Selecting the user will allow you to edit user identity information, reset his/her password, as well as disable the user.

All actions that can be performed in ByteHouse have related permission defined. For example: viewing account resource usage, creating new users, querying data from some table, or loading large data set into ByteHouse.

Permissions that are not resource specific, such as creating databases (*note that databases are account level resources), viewing billing status, or creating a new service user, are not bound to any particular object.

Permission control in ByteHouse is enforced at a role level. Every ByteHouse user is able to have one or more assigned roles.
You can visit "User Management - Roles" page to view all roles that are available under the account. 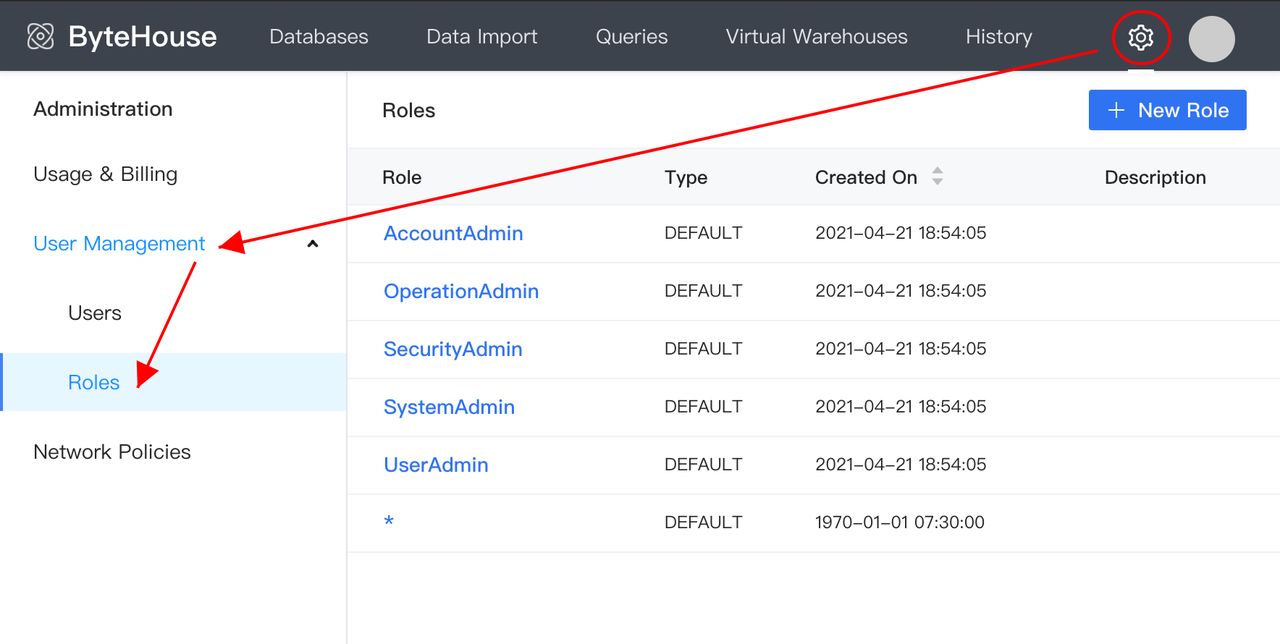 When using ByteHouse, you need to select an "Active Role", and all your behaviour will be restricted by the permissions assigned to this Active Role.

By default, a "PublicRole" represented by an asterisk mark "*" is assigned to all users under an account. This Public Role is also the "Default Role" after a new user is created.

Web Console
In ByteHouse web console, the panel to switch active role is shown below: 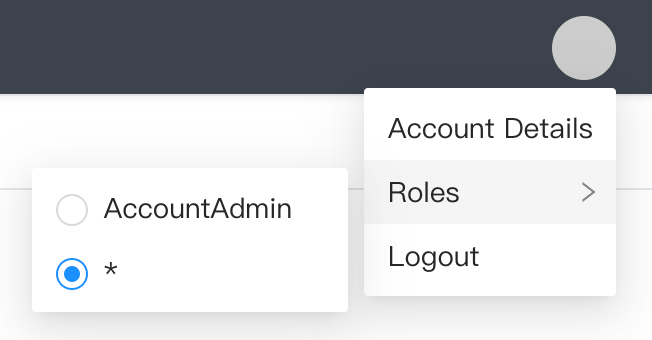 In your " Account Details " page, you can change your " Default Role " to any roles that you are assigned to. The Default Role is the active role in the web console every time you login to ByteHouse. 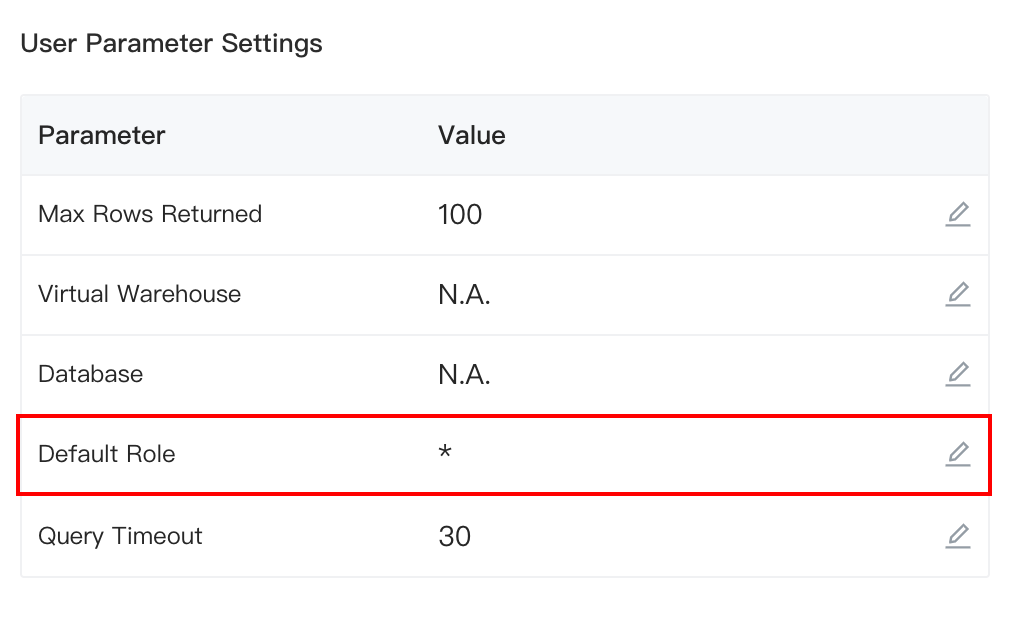 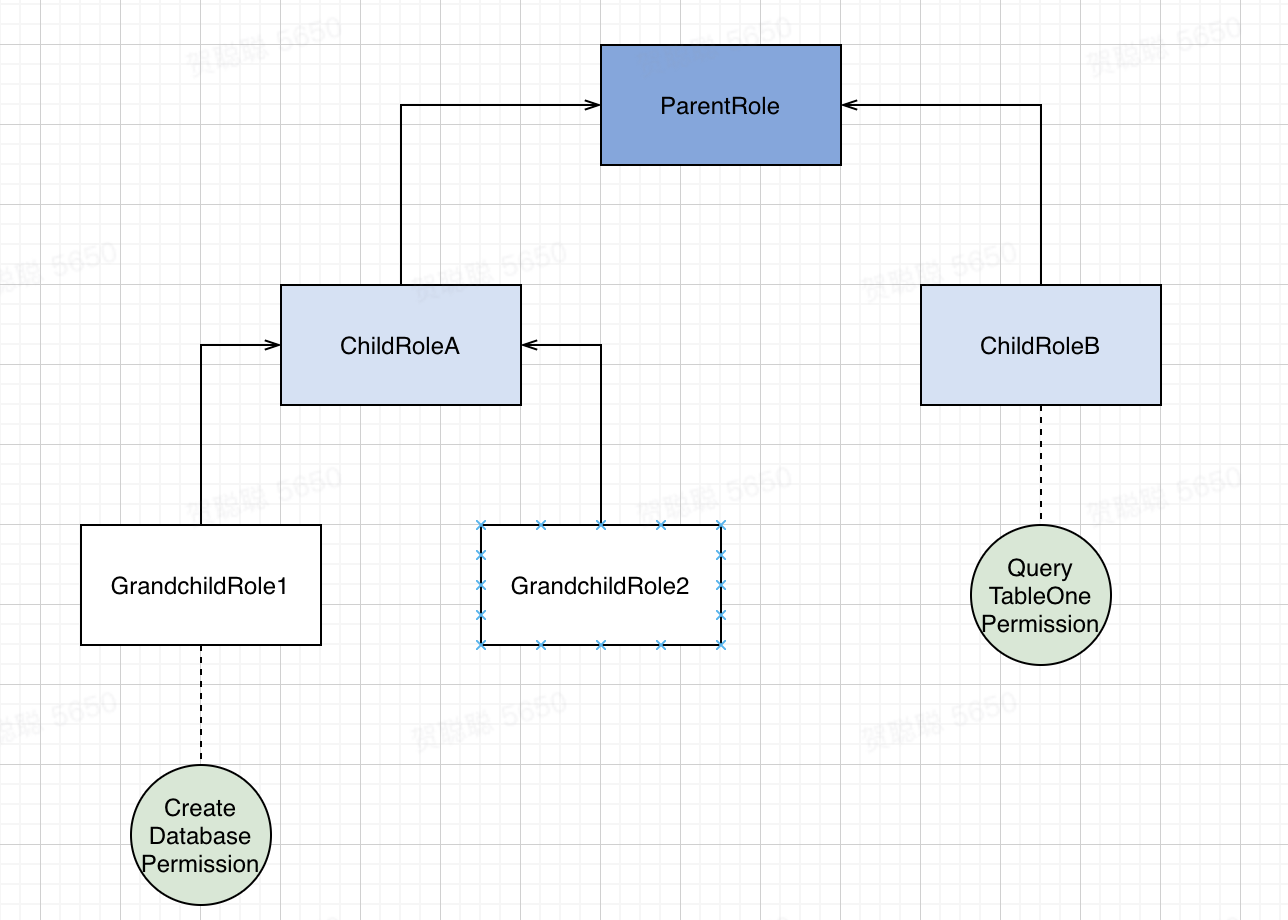 There are 6 system "Predefined Roles" that are already created for you once you sign up with ByteHouse, each of them has some predefined permissions

Here is what you can see on "User Management - Roles" page once you first log in ByteHouse as an "AccountAdmin" role. 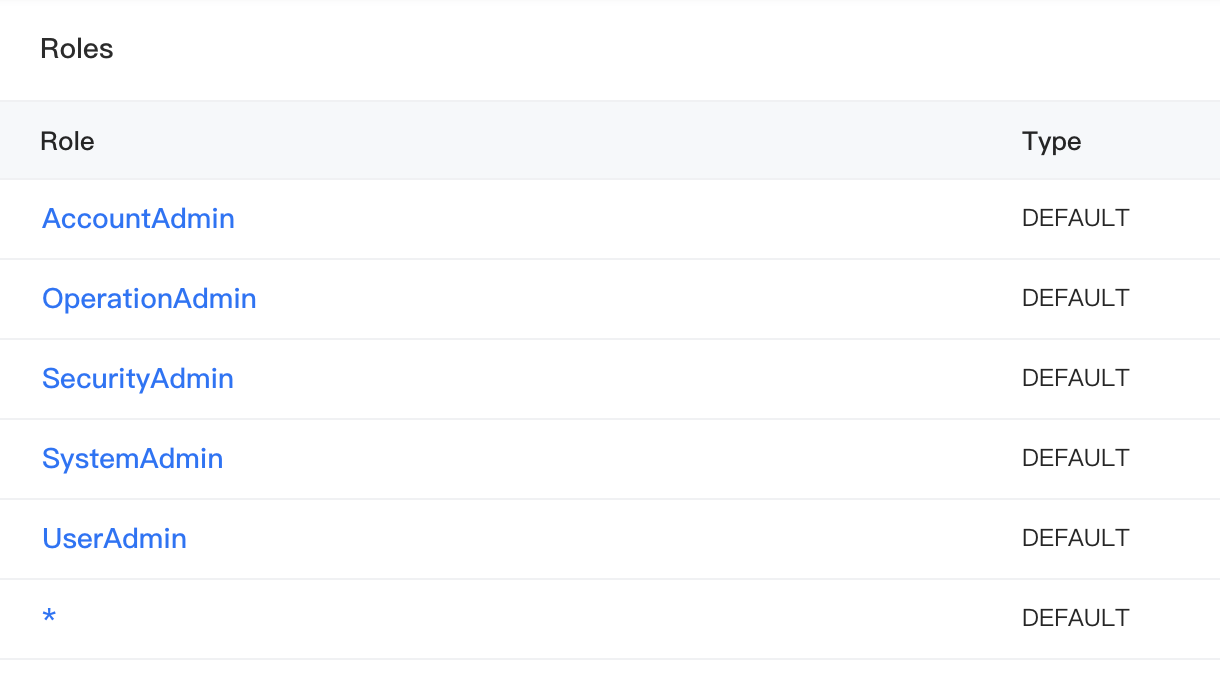 Custom Roles can be created on the role management page. All custom roles are either direct child or indirect child (grandchild) role of SystemAdmin, and are the direct or indirect parent (grandparent) role of "PublicRole". An example of a complete role hierarchy diagram can be represented below: 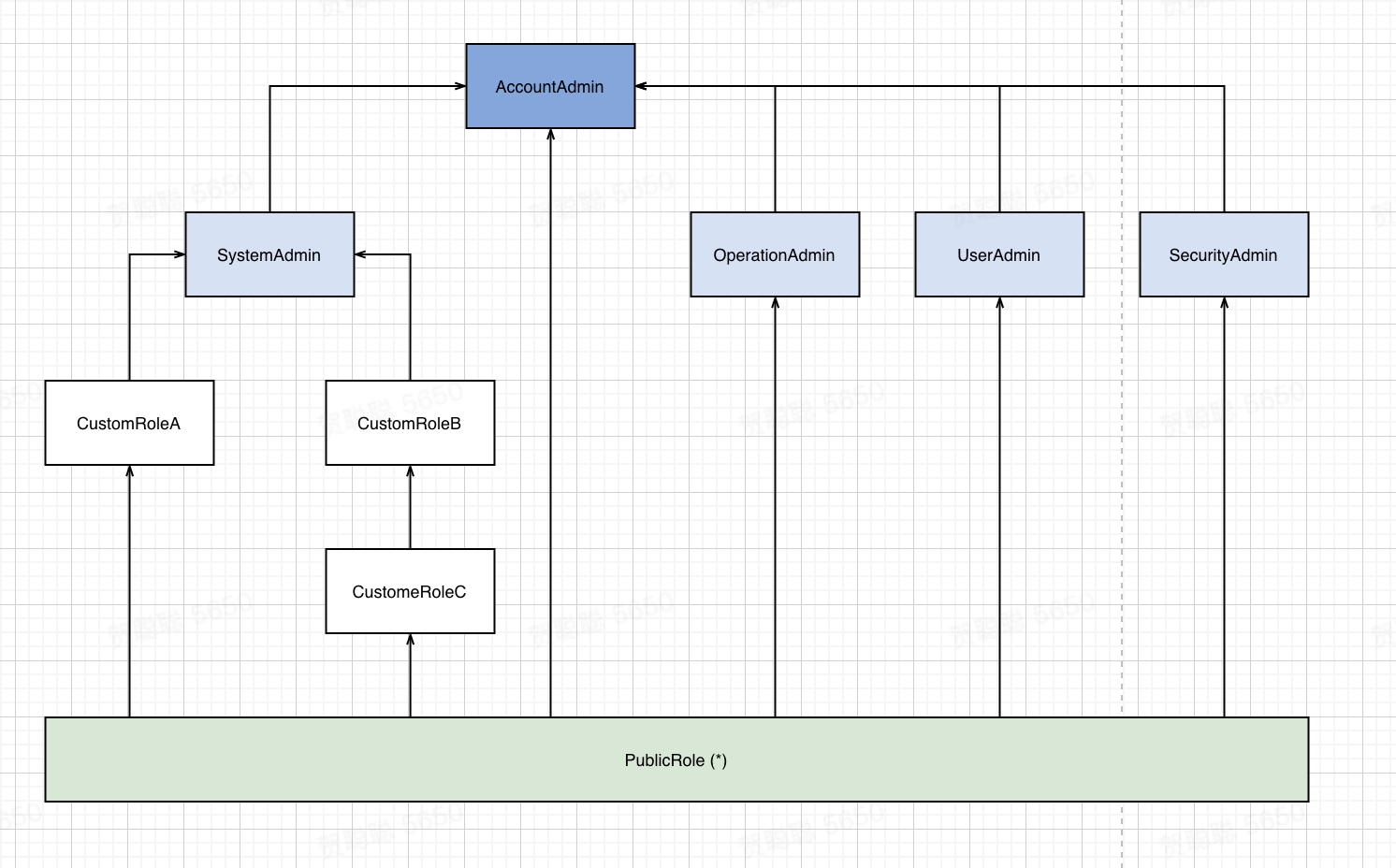 Permission can be granted at role level as explained above.

Label 3 is a special option when granting permissions, with the option checked, the role that is granted with permissions is able to regrant the same permissions to other roles. 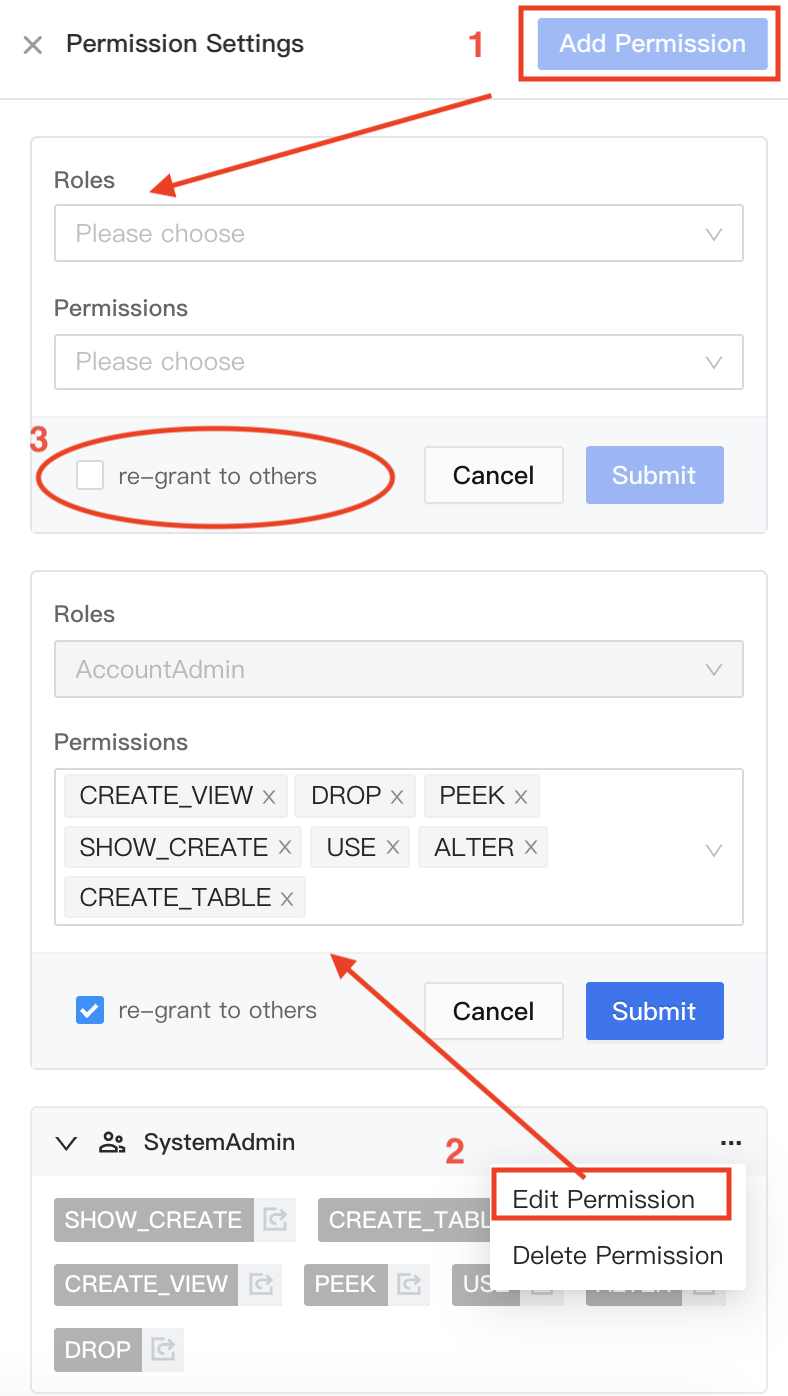 Non object-level permissions can be granted or revoked from the role management page. Currently, only 4 such permissions are open to be granted as shown below.

You can assign a role to users on the role management page. You can search for usernames in the role details page as shown below, and then click the "+" sign beside the username for assignment.

Updated over 1 year ago

ClickHouse® is a registered trademark of ClickHouse, Inc.